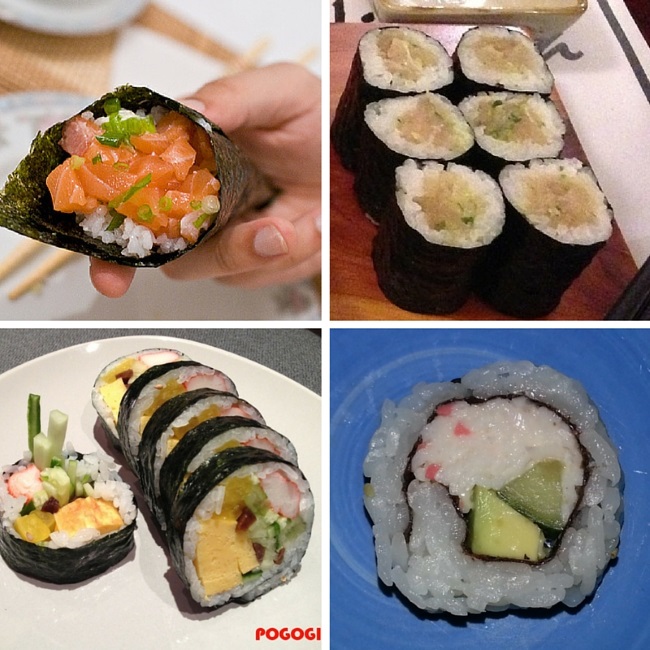 What Is Maki Sushi

When people hear the word sushi, many will instantly think of raw fish. Indeed, sushi Maki can be made with raw fish, but it can also be made with cooked fish, or without any fish at all.  Don't mistaken Maki with Nigiri, as they are both different types of Sushi.

Maki sushi can be made with any fillings you like and it is often filled only with rice and vegetables.

The word Maki translates to "roll/rolled"... so Maki sushi = rolled sushi. It is made by spreading a layer of sushi rice on top of nori (toasted seaweed), and including seafood or vegetables along the edge of the nori and rolling it up. It is then sliced into bite-size pieces. Of course this is just a general description and there are actually several different types of sushi Maki.

The Different Types of Maki Sushi

Hosomaki is a term that is used to describe thin rolls of sushi. Hosomaki is usually filled with rice and one other ingredient, like fish or a vegetable, and it is rolled in toasted seaweed. This type of sushi is characterized by its thinner, smaller cylindrical rolls. Tuna is a common choice of filling for Hosomaki but vegetarian versions would be filled with cucumbers or thinly sliced carrots. 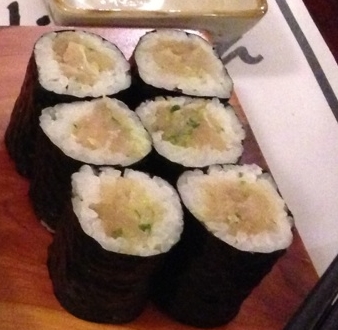 Below is a 2 minute clip on how to make Hosimaki Sushi.(Cucumber Roll)

Uramaki is different than other types of sushi because the rice is actually on the outside. Some people refer to Uramaki as "inside-out rolls". If you have ever had a California roll, you will be familiar with Uramaki. In North America, Uramaki is extremely popular and has helped bolster the popularity of Japanese food. Ironically, the inside-out roll is seldom seen in Japan.

It is made by spreading a layer of rice over a sushi mat and then gently pressing a sheet of nori on to the rice. Other ingredients can be added to the end and then the nori, rice and other ingredients are rolled up with the rice on the outside of the role. There are many different ingredients that you can add to Uramaki but it typically consists of just one to three fillings to keep the rolls from becoming too big...which leads us to the next roll... Futomaki.

Futomaki translates to "fat/chubby roll," which is an appropriate name because Futomaki rolls are usually much larger than other types of sushi. They are often as large as 1 1/2 to 2 1/2 inches in diameter.

Futomaki is made up of three parts; the shell or casing, sushi rice, and fillings. Like other types of sushi, the outer casing is normally made of toasted seaweed and fillings can consist of any ingredients you like but with Futomaki, colorful vegetables are often used as the filling. While some types of sushi use just one or two ingredients in the filling, the large size of Futomaki allows you to use three or more fillings and the chosen fillings usually have flavors and colors that complement each other.

Temaki translates to "hand roll" and this type of sushi can be made in the palm of your hand. It too uses nori for the outer casing, sushi rice, and a variety of fillings. The sushi is made by hand and rolled into a conical shape and it is both fun and easy to make. In Japanese, "te" means hand, hence - Temaki, or hand roll. 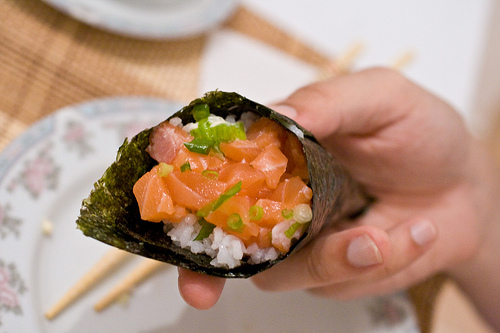 Temaki is usually eaten immediately after preparation because the cone of dried seaweed can absorb moisture from the fillings inside, causing it to lose its crispness. If Temaki is premade it will normally be sealed in plastic that would be removed just before eating.