Donburi And Its Different Types And Common Sauces

Often handed in oversized servings, Donburi is a Japanese rice bowl dish that is topped either with meat, fish and other seafoods. These toppings are simmered with a special sauce that is based from a mixture of cooking stock or broth, soy sauce and a Japanese rice wine called mirin which has a lower alcohol content compared to sake but high in sugar giving you a sweet and delicious taste.

The ingredient that makes the toppings varies depending on the availability and season giving you several choices of different types.

If you love beef, then you will enjoy the sweet taste of beef donburi called Gyudon.

Aside from a bowl of rice being topped with beef, onions and simmered in a mildly sweet flavored sauce, it also mixed with a thin, translucent and gelatinous shirataki noodles.

The popularity of gyudon has spread all over Japan and has become a fast food served at chain stores where you can have the option to top it with raw or poached egg.

Another kind of donburi uses pork instead of beef as toppings. Originated from the northern coast of Japan in Hokkaido, pork donburi or Butadon has the similar mild sweet tasting sauce of gyudon.

Also called as pork cutlet donburi, Katsudon is a variation of butadon which uses deep fried breaded pork called tonkatsu that is served with a distinct tasting sauce coming from a mixture of ketchup, soy sauce, sugar, Worcestershire sauce, ginger, garlic and mirin.

If you happen to love poultry products, then Oyakodon is perfect for you. Popularly termed as the Mother and Child donburi, chicken and eggs are the main ingredients of this dish.

The chicken is first simmered then placed on top of a bowl of rice garnished with scallion or green onions. There is a rare variety of the mother and child dish which uses sliced salmon topped with salmon eggs called ikura.

Now we go to the much awaited seafood donburi. Kaisendon is mainly composed of sashimi that comes with thin slices fresh fish. Aside from tuna, it may also come with shrimps called ebi, sea urchin roe or uni and crab called kani.

Tentamadon or tempura(cool facts) donburi is also popular where you will enjoy the delicious taste of deep fried battered prawns that comes with a soya based sauce.

An exotic type of seafood donburi called Unadon is growing in popularity. This is composed of eel fillet prepared using the kabayaki method. The fish fillet is derived by slicing the eels back and intricately cutting it to form a butterfly shape. This is then glazed with sweetened soy sauce called tare and grilled in charcoal. 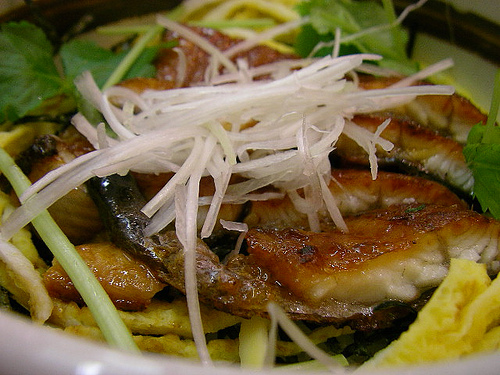 Though the popularity of unadon is still growing, it has been considered as the first kind of donburi as the upper class citizens of then Japan during the Edo period where the first ones to taste this delicious meal.

With the continued popularity of donburi as an easy and convenient way to enjoy a meal, it has been compared and categorized as a fast food. Well, it may be, however the big difference doesn’t come from the fast and convenient dining but rather in nutritional value. This multi-ingredient dish makes up for a complete and balanced meal where you will be nourished with carbohydrates, vitamins and proteins all derived in a natural way and not from fast food ingredients.