Mayonnaise is one of the most popular condiments in the world and it is widely used in a number of different countries. Of course there are some differences in the way mayo is made from one country to another and on this page we are going to examine the differences between Japanese mayonnaise and American mayonnaise.

The question is how much does it differ? Could you blindly swap one for the other and will you notice a taste difference? Are both used differently for different types of food?

Well first off, American Mayo is usually made from a soy-based vegetable oil along with water, eggs, distilled vinegar, salt, and sugar.  Some brands will add their own seasonings or even some lemon juice and dijon mustard but those are the primary ingredients.

American mayonnaise is typically used on sandwiches or hamburgers, mixed in with a can of tuna fish, used to make chicken salad, and is also used as a base for a number of other sauces. Japanese mayonnaise can be used in all of the same ways and it is commonly used to coat cooked vegetables and is often used as a side to a number of different Japanese dishes.

Japanese mayonnaise, pronounce in Japanese as Mayone-zu” or simply “mayo” (with a short “a” sound instead of the more familiar long “a”), is used in a number of other ways as well and some people think the Japanese might have an obsession with mayonnaise.

In Japan you can find mayo flavored ice cream, mayonnaise flavored snacks and potato chips, it can be used as a spaghetti sauce and it can be used as a topping for toast, noodles, even pancakes. If you think it will taste good, you really can put it on just about anything.

This ubiquitous condiment has become so beloved by the Japanese that Kewpie, sells personal-sized squeeze bottles that the Japanese called “my mayo.” 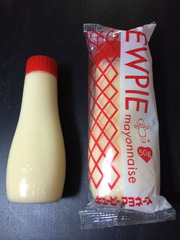 My mayo is meant to be carried around everywhere so that you have mayonnaise to add to whatever you are eating wherever you are.

How could something so deadly be so delicious?  Perhaps that’s only a question the Puffer Fish can answer.  As the second most poisonous vertebrae in the wo

Everybody loves tempura as it is a household name in many Japanese restaurants across the world.  Who doesn’t love the warm crunchy taste of shrimp or yam tempura?

Donburi and its Different Types and common Sauces

Often handed in oversized servings, Donburi is a Japanese rice bowl dish that is topped either with meat, fish and other seafoods.