Sea cucumbers are animals that live on the ocean floor and is a popular Japanese food.  The Japanese and Chinese people tend to like them because of their unique texture, but most westerners have a hard time eating this type of sea creatures.   The same goes for the Sea Urchin, they are both considered the strangest food to eat for many.

There are various sub-species of sea cucumbers. Some of them are harvested for food while others for medicinal purposes.  Also sea cucumbers have many health benefits, click here to read more. 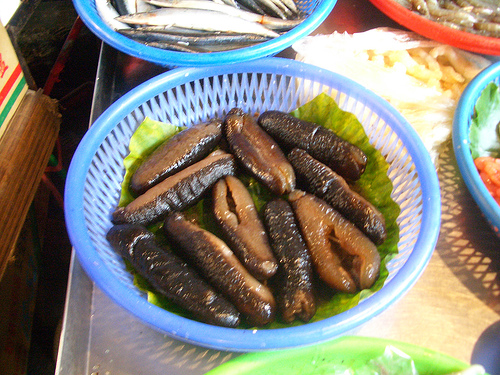 How is Sea Cucumber Prepared in Japanese Cooking

When sea cucumbers are caught as food, their insides are first cleaned out. They are then washed, boiled in water and smoke-dried. Because they have been dried, they have to be soaked in cold water for at least half a day. They are then left to simmer for 1 to 2 hours, after which they will drain and cool. Depending on your preference, you can slice the sea cucumbers into small pieces and put them in soup, stews or stir-fries. For those who prefer to eat them whole, they can fill them with pork stuffing.

In Japan, the insides of sea cucumbers are treated as separate food items called konowata. They are served on gunkan, which is a type of sushi. Others prefer to pickle it. The Naamako Chaburi is a sea cucumber that has been marinated in tea and then served with vinegar on it.

Most cultures in East and Southeast Asia consider the cucumbers as a delicacy. Quite a number of dishes can be prepared with sea cucumbers. Some of the most common ingredients that go with sea cucumber dishes include dried scallop, shitake mushroom and Chinese cabbage.

A video below demonstrates how to clean and prepare the cucumbers.