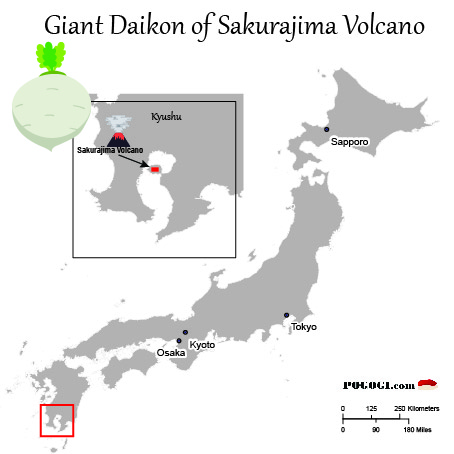 A month ago on social media we notice something very interesting that caught our attention because it was big.  It was an image of a giant daikon.  We couldn’t believe the size of it.  Daikon is basically a radish that is used for pickling and garnishes on certain Japanese dishes.  With over 100 of varieties from different regions with its own unique characteristics, the daikon itself was introduced to Japan 1300 years ago.  Across Japan, this radish became quite popular during the 1600s (Edo Period).

Apparently, this large daikon is not an anomaly because apparently these giant are grown in only one specific area of Japan.  This area is located in southern Japan near the Sakurajima volcano.  What is important is the nutritious ash soil of the volcano providing the key component for its massive growth. For a very long time now, this giant radish is the symbol of the area where rice growing is not possible.

With further investigation we landed on a National Geographic article written back in 2011.  The writer Andrew Evans, did a great piece on this interesting daikon.  He mentions that the largest daikon ever discovered was close to 70 pounds which is roughly 31 kg.  According to another source, the average weight is around the 13 pound mark and could potentially get to the hundred pound mark from historical records.  Records have shown that the local people only started to plant this giant variety back in the 1800s but many believe it to be older.

A look at The Volcano

From the website Volcanodiscovery.com, this special volcano erupts one to two times the day.  Luckily, these are very small and minor explosion but large enough to eject dusty ash 20,000 feet into the air for many kilometers.  It is common for the area to have ash storms.  According to Evans, local authorities provide yellow bags where people can help out with the cleanup by filling these bags with ashes.  Trucks will come around and pick these yellow bags up place neatly on the side of the street.

The most significant dangerous and biggest eruption happened back in 1914.  Here is a small YouTube clip -

Many people tried to make a quick buck by taking some of the seeds and trying to plant elsewhere away from the Sakurajima volcano, obviously with no success.  Without the help of the minerals provided by the volcano, these daikon only grew to their normal size of an everyday daikon.

There was a Facebook page dedicated to this magnificent giant radish but clicking on the link, unfortunately, it does not exist anymore.

While it is important to note that there are no specific regulations from the FDA or other food agencies that govern sushi-grade fish products, there are some widely-accepted unofficial guidelines

Top Sushi Fish and How They Benefit Your Health

Sushi, the most popular Japanese Food, is becoming higher in demand all the time and its easy to see why.  The combination of seasoned rice married with roasted seaweed and fresh f

What Exactly is Shirataki Miracle Rice?

Though shirataki rice or miracle rice is still fairly new to the Western culinary world, it has been a part of the Asian diet for nearly 2000 years.

Understanding Ramen Noodles and its Cost

Long noodles in steaming hot soup! In Japan, just about everyone loves ramen. Ramen shops can be found nation wide. One bowl cost about ¥500 - ¥1,000. Ramen is popular with young and old alike.

What Is a Sushi Kit?

Sushi has become very popular and for people that just can't get enough sushi, trying to make their favorite dishes at home sounds interesting and that is wher