The Shiitake mushroom is a type of edible mushroom that is used not only in Asian cuisine, but also in traditional medicine as well. Along with the Enoki Mushrooms, Shiitake has been used in Asia for thousands of years, and people used it for a variety of reasons.

People consume the mushrooms by stir frying or using as an ingredient for hot-pots shabu shabu style.

It was believed that the Shiitake mushroom improved blood circulation, prevented premature aging, treated upper respiratory diseases, prevented and treated various liver problems and even boosted the QI (a notion that refers to the "Energy of life").

The health benefits and properties of this popular mushroom are not a secret to anybody. One of the most notable benefits is that these mushrooms strengthen your immune system, due to a highly potent compound known as "Lentinan". Lentinan naturally boosts your immune system and makes it stronger in the face of infections and diseases. In certain areas, Shiitake mushrooms are widely used to control serious diseases. The mushrooms can also have a positive impact on your cholesterol, as it reduces the levels of bad cholesterol in the blood, thus decreasing the risk for cardiovascular diseases in the future. 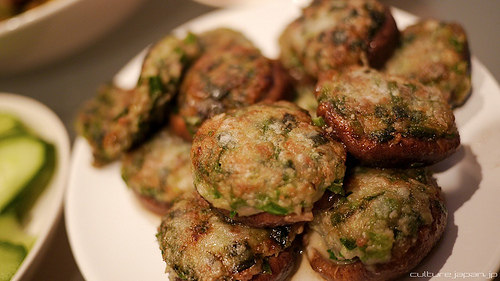 Research suggests that Shiitake mushrooms also have anti-cancer properties, and it can slow down the production of cancer cells amongst those who are affected by this ailment. It is known that the mushrooms can considerably reduce the risk of gastric cancer. These mushrooms are also known for their high content of iron, which not only supports healthy blood circulation but it also delivers more oxygen to the brain and other vital organs, as well as helping fight against anemia. Last, but certainly not least, this wonder mushroom is very low in calories and contains dietary fiber, which means that it can be a great addition to your diet if you want to lose weight quickly and naturally.

How Is It Grown?

For 2000 years, the Chinese and Japanese people used to cultivate the Shiitake mushroom by cutting down the Shii( hardwood) trees using axes and then placing them by the trees which already contained Shiitake spores to boost production. Slowly but surely, the mushroom started to grow on the other tree as well. As the years passed, the process of Shiitake cultivation has been considerably improved and even industrialized. This has lead to commercial cultivation in the US and numerous other countries around the world.

Shiitake mushrooms can also be grown in your backyard quite easily in logs which have been tapped with spore impregnated dowels. If done properly, these logs can yield mushrooms for up to 10 years. Check around for local mushroom courses or organizations for more information. We took a 1 hour course for $60, which included a kit containing everything you need (pre-cut logs, hundreds of impregnated dowels, pre-marked drill for the dowels, beeswax, brush, instructions...). We were also taught how to dry them at home.

Shiitake mushrooms are usually purchased in dried format and are quite affordable. They can be easily re-hydrated by simply soaking it in lukewarm water prior to cooking. One of the main benefits of drying the Shiitake mushrooms is that it enhances the "umami" flavour. Umami is considered to be the fifth taste, and it is very difficult to describe... It resembles a "meaty" taste with a long lasting sensation.  Dried Shiitake is known for having a rich smoky flavor. The Shiitake mushrooms is use in many dishes and can be either fried or steamed.