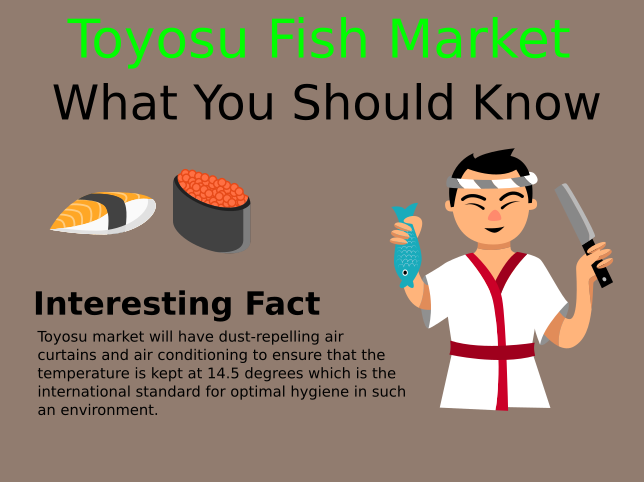 After years of controversy and intensive debates over the Tsukiji Wholesale Market’s fire safety concerns, earthquake resistance and sanitation issues, this famous market is finally being relocated!

Most locals in this area know Tsukiji market as an excellent source of fresh seafood, specifically tuna, and although its relocation was supposed to have happened two years ago, unnecessary bureaucracies and covert political manipulation slowed the process considerably.

Tsukiji is one of Japan’s most popular tourist attractions and is often endearingly referred to as “Japan’s Kitchen” because it’s where locals and tourists go to experience truly authentic Japanese kitchen.

However, due to old and faulty wiring coupled with overcrowding, this world-famous market experienced a massive fire last year that left an entire section of it completely burned down.

The New and Improved Tsukiji

Not only will the new Toyosu market be located in an indoor facility on a man-made island, but it will be twice the size of the old Tsukiji market. Also, Toyosu market will have dust-repelling air curtains and air conditioning to ensure that the temperature is kept at 14.5 degrees which is the international standard for optimal hygiene in such an environment.

Tsukiji was supposed to have been moved decades ago. However, thanks to a political tug-of-war between Tokyo Gas, a former Tokyo minister, and the Tokyo metropolitan government the plans were derailed and set back by decades. When Governor Yuriko Koike started his term, it was discovered that the soil and groundwater were severely contaminated with lethal chemicals that included benzene.

The Tokyo government then endeavored to implement safety measures that involved closing up building basements with concrete, installing ventilation equipment and even investing in monitoring equipment to keep track of groundwater pollution levels. All of these developments amounted to 38 million yen or $340,000.

Toyosu market finally opened after relocation preparations that saw the government spending a total of 600 billion yen. However, what the optimistic Koike doesn’t realize is that the challenge for Toyosu has only just begun. While the Governor has expressed aspirations for Toyosu to become the country’s primary seafood trading center, achieving this will be difficult to say the least, especially when you consider the rapidly changing trends in fish consumption, which has gone down from 80% in 1989 to 50% last year. Couple this with the rebranding that the administration will have to do and you’ve got a major feat ahead of you.

Since Tsukiji was surrounded by 900 businesses that relied on it for the daily supply of fresh seafood, the government has had to facilitate the transportation of those businesses to Toyosu as well. This is obviously a massive exploit that requires 2, 600 forklifts and turret trucks, as well as the construction of a temporary expressway in order to transport the products without affecting traffic.

Toyosu fish market was officially opened on Saturday, which means that members of the public are now allowed to see what’s going on inside through a glass observation deck.

Meanwhile, the government has until February 2020 to demolish the Tsukiji market completely, and create space for the construction of a mega parking lot, which should be finished by the time the Tokyo Olympics and Paralympics begin.

If you’ve ever been in a first class Japanese restaurant, then you were probably handed some hot towels in a basket or plate.

The Satoimo Root, otherwise known as Japanese Sweet Taro, is a peculiar looking vegetable that grows rampantly in Japan.