What Meats and Vegetables to use in Shabu Shabu?

A list of well-known Japanese dishes will include sushi and tempura, but shabu-shabu may not even make the cut, which is really a shame because it is one of easiest Japanese meals to prepare.

Sushi calls for a sushi master, and non-oily tempura also requires special techniques. But shabu-shabu isn’t as fussy - anyone with a pot and ingredients can make it. In another article, we explain how to make shabu-shabu broth and sauces, and in this article, we will share with you the ingredients that complete this tasty hotpot.

Beef and pork are the most common meats used in shabu-shabu, but you may also use chicken and lamb.

Higher-end restaurants in Japan only serve beef for shabu-shabu. Marbled beef is the top choice, but some serve leaner cuts such as shoulder and loin. 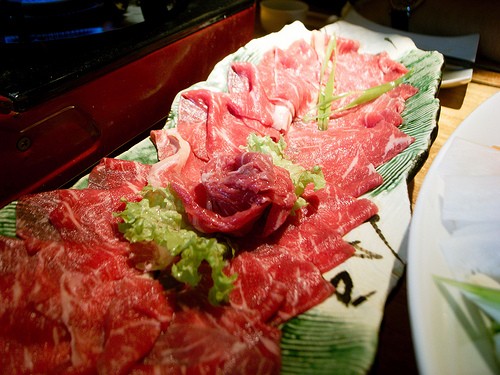 The most important thing is that whatever meat you choose, it has to be thinly sliced because it has to cook very quickly. Shabu-shabu is the sound made by swishing the meat and vegetables in the broth and ideally, only a few swishes are required. You can get your butcher to cut your meat for you if you can’t find very thinly sliced meat.

by whologwhy - Seafood for Shabu Shabu

Seafood is very popular in Shabu Shabu as well, some popular seafood are tiger prawns, squid and scallop.

The vegetables are just as important as the meat because they will add their umami-rich juices to the broth that you will gratefully sip at the end of the meal. The Japanese say that you first eat with your eyes, so the trick is to choose vegetables with different colors. The ones most commonly used are Chinese cabbage, chrysanthemum leaves, negi (Japanese scallions), carrots, enoki mushrooms and shiitake mushrooms. You can also add tofu if you wish.

As with the meats, it is essential that you cut the vegetables into smaller pieces so that they can cook fast. Some vegetables that require longer cooking times such as the stalks of the Chinese cabbage and carrots may need to be pre-boiled briefly. For decorative purposes, make cross-hatch cuts on the tops of the shiitake and slice the negi diagonally. If you cannot find Japanese vegetables, choose similar ones such as cabbage, and even lettuce, which some Japanese households include for the crunch. The Japanese are also big on presentation so arrange all of your ingredients in groups on platters for a neat, organized look.

As you cook the meat and vegetables, scum will form on the broth and it is also important to remove this with a handheld strainer because you will drink this delicious, umami-packed broth with a starch after the meat and vegetables are gone. In Japan, this is called “shime” or the “closing.”  Udon noodles are popular, as well as kishimen which are similar to udon but flat like fettucini. Some restaurants serve sticky rice cakes called mochi, and others, cooked rice. Whichever starch you choose, put it in the broth and let it heat up for a while before you eat the perfect ending to this delectable dish.

This page is a Working Progress and will be Updated further.  Let us know of any Dead Links by sending us an Email

A Guide To Wasabi, Wasabi Paste and Wasabi Powder

If you've ever ordered a plate of sushi, then chances are you have encountered Wasabi Paste.

What is the difference between Sushi vs Sashimi

Many people are not clear about the difference between sushi and sashimi.

The island nation of Japan consumes more seaweed (both in quantity and variety) than anyone else.

When it comes to Japanese food, there are 3 main types of seaweed products:

Best Things to Do in Kagoshima Japan and Where to Eat

Kagoshima, Japan's southernmost city, might not be at the top of the list of places to visit for most travelers, but it should be.