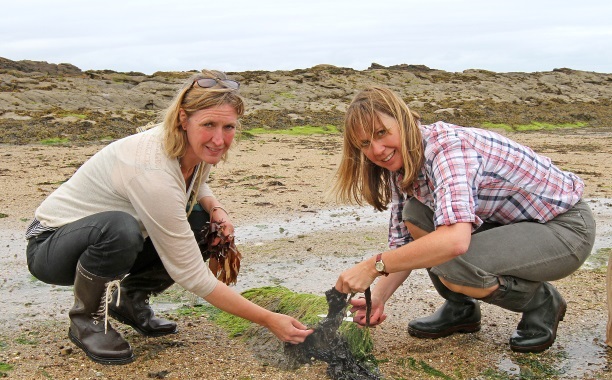 We are thrilled to have had the chance to do an interview with the founders of Mara Seaweed, a Seaweed company out of Scotland.  In the past year, their Seaweed products have been making large strides throughout the U.K, and are getting to be known players in the global market competing against major seaweed producers from Japan and China.  Check out some of their interesting answers that explains why their seaweed products standout! 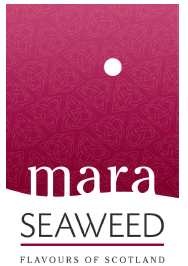 1.  What are some of the main differences between Mara Seaweed harvested in your region and seaweed from Japan?

We do have Kombu (Laminaria Digitata not Japonica), Wakame. We do have Nori (Laver) and Tochaka (carragheen) and Aonori (ulva) which grow on our shoreline, but we do not sell currently, although we may in the future when we work out how to farm it, also Carragheen . We do not have Mozuku, and Hijiki.  We have Dulse and Pepper Dulse, neither of which you sell in Japan. In terms of taste we can boast that our Kombu has an excellent flavour due to the excessively cold waters of Scotland.

2. Although seaweed for consumption has been dominated by the sushi craze, it has long been a part of the Scottish environment. How has it been harvested and consumed over the years in Europe?

Seaweed has been valued in Europe since the time of Mesolithic man during the Ice Age, 4000 BC when it was gathered from the seashore and was an important food source. During the time of St Columba 1st century AD , the Carmina Gadelica  (1941) records Dulse seaweed growing on a rock was worth as much as a cow, as a unit of value. Dulse was prized as much as garlic or salt by the early Irish monks.

Seaweed has been a vital food which has long been harvested by those living by the sea. Throughout the 18th and 19th centuries in Scotland’s highlands and islands, seaweed was gathered by hand at the lowest tides, for use as a fertilizer on croft lands and rigs. During the time of the Highland Clearances, when native scots were moved off the land and became economic migrants “their best food consisted of shelf-fish, and a kind of broth made of seaweed, nettles and other wild plants, into which is infused a small sprinkling of oatmeal”.

In the 19th century Dulse was sold on the east coast in Angus, Fife and Lothian even up to Post Victorian Times. It was eaten after cooking it in the embers of the fire for a short time sprinkled with brine. Other species such as Alaria Esculenta and Laminaria Saccharina were also available from street vendors in Edinburgh. Carragheen (Chondrus Crispus) was also used widely in the Hebrides to make jelly-like puddings.

In the 21st century, seaweed is hand harvested from several different locations in Scotland and is becoming the “must-have” ingredient of our Top Chefs: Nathan Outlaw, Martin Wishart, Michael Smith, Heston Blumenthal, Brett Graham (all with Michelin stars). Products with seaweed flavouring, marinade, inclusion as an ingredient have been receiving accolades in the food world eg.  3*s for Seaweed oatcakes, smoked salmon seasoned with Kombu, etc.

On the European Atlantic coast, macroalgae have been harvested by coastal populations for centuries. There have been two uses, human consumption and agriculture.

In France, Spain (Galicia) and Ireland there are an increasing amount of small and medium enterprises using edible seaweed. These new types of industry have been developed over the past years following the increasing demand from European consumers. 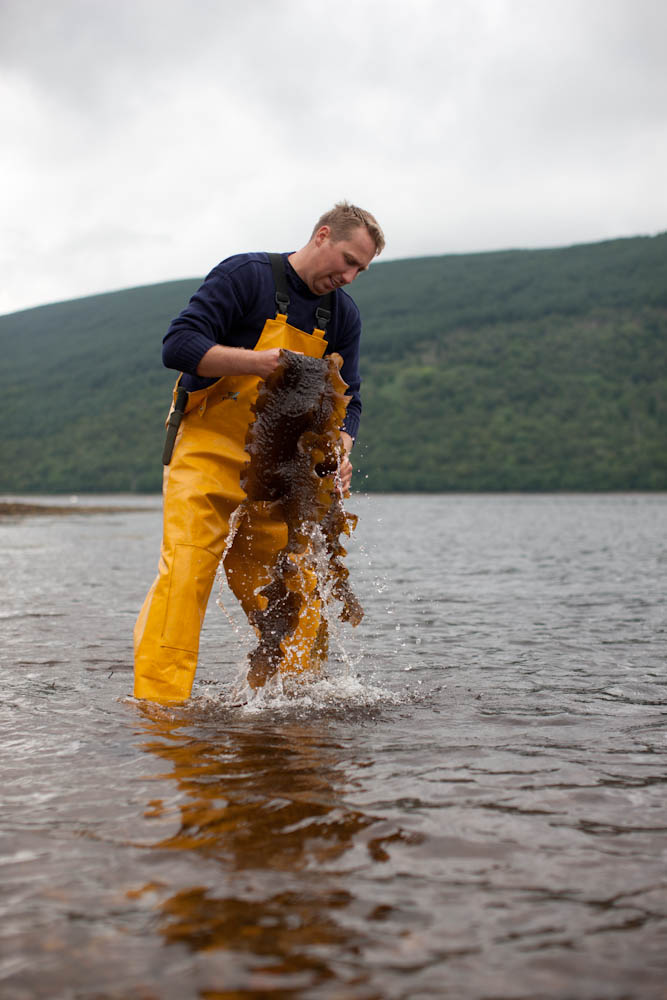 All the edible algae are harvested manually and dried in an artisanal way. Harvesters gather either the cast or cut seaweed at low tide, they use specific equipment to harvest: ie knives, rakes, pitchforks, sickles, nets. Some gatherers use small boats which they load with seaweed and then pull them to the beach with the help of the rising tide. Diving is another way seaweed is harvested.  Today you can buy Scottish, Portuguese, Galician and French artisanal seaweed in high quality delicatessens and flagship stores throughout Europe.  Seaweeds such as dulse, laver (nori), kombu and ulva (sea lettuce) are sold as tartares, dips, soups, miso broths, salads, snacks. Seaweed foods have been identified as one of the significant food trends for 2015.

3.  Do you feel the global popularity in Japanese food has helped Mara introduce seaweed to the market in a different way?

The global popularity of Japanese food has definitely helped consumers in the UK know that seaweed is edible and can be eaten safely and is extremely good for you. Mara seaweed develop its own identity and find its own place in the market.  Seaweed is a premium product and a high value food in the UK.  We know that in Japan it is a significant part of the diet and it is abundant and relatively inexpensive. In the UK it is less common and the harvesting/production process is labour intensive. Our product therefore ends up being very high end and more expensive, but we think the incredible flavour and easy usage as a result of its ground, dried form, makes it worth it.

We want to market seaweed as a product that can easily fit into the type of food that people in the UK eat. This may range from using it as a salt alternative sprinkled over French fries or boiled eggs to mixing it through sauces, soups, infusions, dips or marinades. We have the job of re-classifying it as a food firmly provenanced in our clean and clear Scottish waters and is therefore safe and of high quality. Through our packaging we have highlighted the Scottish provenance of our seaweed.

The creel on the front of the tin is an actual basket that was used for collecting seaweed that was found washed up on a beach in Elie, Scotland.  Our seaweed products are branded as high value foods that will add flavour and taste and health benefits to food. We have been marketing it as a salt alternative and flavour booster. People in the UK understand that and the low sodium content is a bonus from a health point of view.

4.  Scotland has long been known for producing some of the world's best Whisky. Lately, Japan has been making headlines with their expertise and awards in this craft. Do you think Scotland has the potential to overtake Japan in the production of high end seaweed?

The seaweeds that we can grow on ropes (Alaria, Saccharina Latissima, Laminaria Digitata) will over time be scaled up.  Trend monitors predict there will be more seaweed farms tacked onto existing aquaculture businesses, to take advantage of MTA (Multi trophic aquaculture) which is ecologically beneficial for fish farms. We are proud of the high quality of our seaweed which results from the artisan drying and milling process, which retains the intense freshness and flavour of the seaweed. Whilst we will not overtake Japan in the volume of seaweed that we harvest, we are confident that we are offering a high quality product which has been grown in a nutrient rich, cold clean waters of the North Sea and Atlantic.

Many of our high value seaweeds such as Dulse, Sea Lettuce, Pepper Dulse and Nori, cannot currently be grown and harvested intensively in the UK. We have a commitment to making our seaweed sourcing and growing as sustainable as possible. We cannot therefore compete, with the high volumes of seaweed that you can produce in Japan where hectares of sea are covered with seaweed growing ropes. For ecological reasons we would never get planning permission to build out seaweed farms into Scottish/UK waters on the scale you see them in Japan and China.

5.  Over the past several years, there has been a lot of talk around the plight of the prized Blue Fin Tuna, and the impacts facing their numbers from the increasing global popularity and demand for sushi and sashimi. Mara recently won the Interface Excellence Sustainable Partnership of the Year Award for your seaweed cultivation. Do you think you can offer any solutions to the impact Japanese food might be having on the supply of seaweed as a whole?

Buying seaweed from Scotland, Ireland, UK. From a known, safe provenance.  With an increase of rope grown seaweed there will be more seaweed to export to Japan and other countries.

6.  We understand that Mara seaweed has been working with Reiko Hashimoto's culinary courses in England. What would you say to a "purist" who rejects the use of a non-Japanese seaweed for sushi?

They are all sea-vegetables and have more in common than they do differences. Scottish seaweed is grown in cold waters which is proven to make the flavour deeper. We know our seaweed tastes incredible, we have done triangle tasting with other seaweed brands sourced from different areas, ours wins every time.  We have perfect growing conditions for seaweed. Give it a try!

7.  "Umami", or "the Fifth Taste", is always so hard to describe. Mara has been mentioned in Food & Wine noting that, "seaweed has a really good "Umami" flavour." In your opinion, what the heck is "Umami?!"

Umami translates into British as Umai “delicious”  mi “taste”.    It can be described as a pleasant "brothy" or "meaty" taste with a long lasting, mouthwatering and coating sensation over the tongue. The sensation of umami is due to the detection of the carboxylate anion of glutamate in specialized receptor cells present on the human and other animal tongues. Its effect is to balance taste and round out the overall flavor of a dish. Umami enhances the palatability of a wide variety of foods. 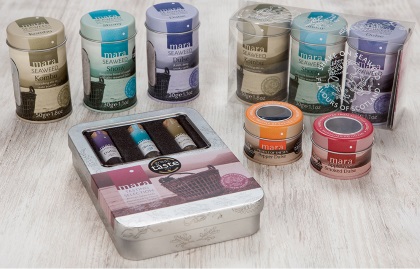 8.  You offer Kombu seaweed in a form that seems so easy to add to dishes. Why do you think people are still so hesitant to try seaweed?

Associations with gloopy, green seaweed on the beach with a strong fishy smell. When they actually taste our dried, ground, seaweed in colours of pink, gold and brown they are surprised in a very good way. The myths disappear. We explain, it is like judging prize apples growing in an orchard by the rotten apples lying on the ground. You only pick at the lowest tides at the optimum times of year. We pick seasonally and sustainably.

10.  What's the best Japanese restaurant in your area?

Pogogi gives a huge thanks to Xa & Fiona.

1. Can you tell us a bit about yourself and how you got into knife sharpening?

Gaku Shibata is the chef and owner of Azasu in New York City.

We are very ecstatic to have done an interview with Arigato Food Tours Japan.

When was the last time you saw a female chef behind a sushi bar? If you've never heard of Chef Niki Nakayama, listen up.

We had an opportunity to do an interview with John M. who works for Nippon Shokken U.S.A out of the Chicago Office.