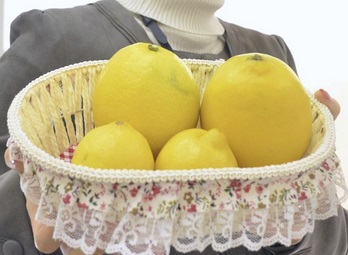 Hachijo: A Japanese Lemon 3 times larger than a Supermarket one?

What are Hachijo Lemons?

These lemons are three times larger than the regular lemons that you find in your local supermarket. You would think that, “Whaaa” a huge lemon grown in Japan?  Considering that most things in Japan are small.

They are grown from an island in Tokyo named Hachijojima. You can eat the skin but do not worry, it is not bitter.  So understand that using the grated skin as a garnish/ingredient won’t be as zesty as regular lemons, but the juices taste like a regular lemon. Also think about the amount of lemon juice you can make and share with your friends and peers.

They weren’t called Hachioji originally when they were brought over to Japan to be grown.  The Japanese only started planting them just before World War 2, but they were not successful in getting profitable yields.  Being a new fruit to the Japanese landscape, they had to figure out the best conditions to grow them.  Later on, they understood that strong winds and the salt in the air blown from the sea were the two main culprit.

Burger King Japan has recently release a cheeseburger where the buns and cheese are of the color black.  Apparently this was achieved by using bamboo charcoal.

Back in 2006, there was a famous chef in England who cooked for the Japanese ambassador who fell flat in the flavor Department and in terms of technique.  Basically the ambassador told him that he

What is the Difference between American Wagyu and Japanese Wagyu?

Let’s begin with the basics: What is Wagyu?

"In recent years we’ve seen the proliferation of n