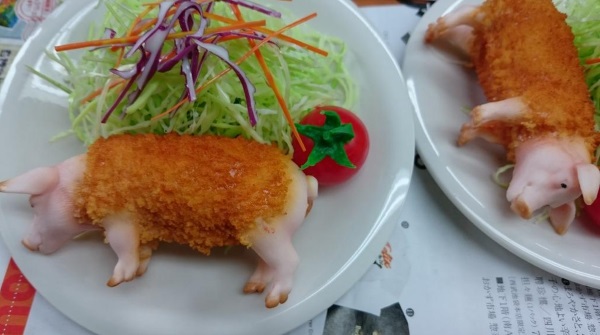 Plated dishes in Japan are showcased proudly whether it is in a department store or in a restaurant district.  These dishes have a sense of style, a strong appeal and a desire to consume by making your mouth water.  That is the main focus of these plates as aesthetics play a strong role in Japanese cuisne.  What many people do not realize is these showcase or display dishes are fake and are not edible.

Some of them look so real that they are mistaken for real dishes.  That is truly the goal, to entice customers to come into the restaurants.

Recently, viral images have been hitting the web depicting miniature pigs in Miso soup and in salad dishes.  There was a small outcry among online users who did not like what they saw and many have tweeted saying they lost their appetite after viewing the images. 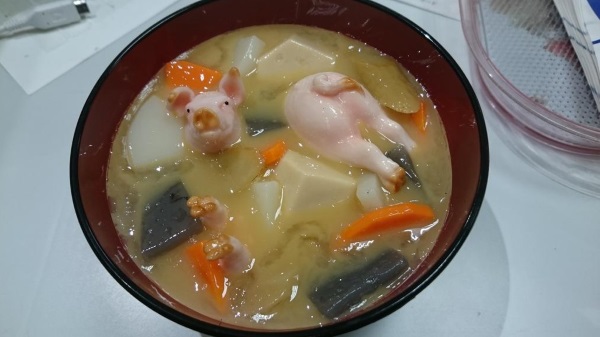 Many had thought the miniature pigs were real, except the fact they are made of plastic.  Some of those who found out the pigs were fake at first glance, still had issues because they felt it was inhumane or sent the wrong message.  So there was quite the debate happening throughout the hours when the images was first tweeted.

The company who posted the images called Nagao makes replicas, and they are headquarters out of Tokyo.  They wanted this publicity for their company, even though it sparked some heated debate.

Japan has a vast variety of replica foods and foods that are edible but made to look into something that is disgusting like excrement made out of chocolate.  This is probably strange to some people especially to outsiders.  What is amazing is the creativity in making the display dishes and to make them look real as much as possible.  Nagao succeeded in this case.

Who doesn’t like a Kit Kat bar once in a while?  It is one of the most iconic candy bars/chocolate bars in the world.  It is as a worldwide phenomenon hitting global markets in 16 countries and has

Mos Burger and Mister Donut are at it again, with high calories buger style donuts to ma

Did you know Japan has an Appetite for Sheep?

"In recent years we’ve seen the proliferation of n

Could American Pie's Sherminator be your next sushi waiter?

"Chris was spotted serving sushi and sake on Tuesday night at the Santa Monica location, with seemingly no patrons recognizing the famous face, except one eyewitness who snapped a serie